We recorded the first installment of what will become a series of EP recordings by the AnyWhen Ensemble, beginning with “Rivers Music”.  Check the last entry in this blog for more about the piece.  The series will include several short recordings of many different smaller projects to be released primarily online.  Each recording will also be a collaboration with a visual artist, in this case my good friend Andrew Rowan.

The EP series is my response to some of the changes in the way recordings are released to the public.  Because of financial pressures and the prevalence of downloadable music, it makes more sense to record often, but to also record cheaply.  With an EP recording, a short form lasting anywhere between 20 and 40 minutes, we can put more work out in the world without breaking the bank.  This series of recordings will be released online primarily at this website for free.  Another added bonus is that we can engage in a wider variety of projects and not worry so much about devoting an entire full-length album to each one.  The next project could go in any direction, and it probably will!  Stay tuned for details.

We had a great time recording the new music, and all felt it went really well.  I find each time I go back into the studio I have a better idea of what I want to achieve, but I also find that each session is an incredible collaborative experience.  All of the musicians in the group were eager to offer their insights on what might make the project better, and I always appreciated their comments.  The recordings are truly group projects, and I can’t thank them enough for their sincere efforts.

This music was a special challenge in that it had so much open space and called on the musicians to improvise in new ways that we hadn’t before in this group.   We even found that, to capture one particular note on the bassoon, we needed to set up an extra microphone positioned right above the bell of the instrument.  The biggest priority was always try to keep the energy of the music moving forward, never letting the music get stale because we want the recording to come out “perfect”.  I feel we did achieve this and I can’t wait to begin mixing the album.

Here are a few photos from the recording session.

On a break, DD on left, Shirley Hunt on right. 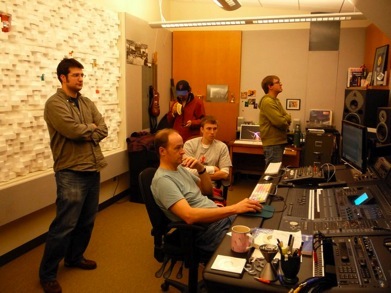 Listening to a playback with Lance Miller, our recording engineer.  Hashem Assadullahi eats a banana.