Douglas Detrick is a composer and trumpet player who resides in New Rochelle, NY and was raised in Portland, Oregon. Equally at home as a performer and a composer, he is a versatile and eclectic musician establishing his reputation as an innovator in jazz, chamber music, electronic music and improvised music. AnyWhen Ensemble is his primary musical project, but his music has also been performed by the NOW Ensemble, the Meridian Arts Ensemble, and Brian McWhorter’s Beta Collide, and recently conducted the Cherry Blossom Arts Orchestra in his Downbeat Student Music Award-Winning arrangement of Duke Ellington’s Single Petal of a Rose.

Hashem Assadullahi is a saxophonist, bandleader and music educator in New York City. Hashem has performed music ranging from the big band repertoire of the swing era, to straight-ahead styles, to contemporary projects performing the works of Ornette Coleman, The Art Ensemble of Chicago, John Zorn, and Tim Berne. In 2008 Hashem formed his Quintet, featuring some of the best musicians in the Pacific North West, along with trumpet icon Ron Miles. The group has since expanded to a sextet and has recorded two albums: Strange Neighbor (8bells, 014) and Pieces (OA2 records, pending release). Hashem has lead groups featuring some the world’s greatest talents in Jazz, including Alan Ferber, Ben Monder, Mark Ferber, and Rich Perry. In addition to his own releases, he has had the opportunity to record with several ensembles, appearing on the albums Live at Jo Fed’s with the Poisonous Birds (June 2008), The Turning Point with the Douglas Detrick Quintet (8bells, 015), as well asWalking Across (8bells,016), Rivers Music (Origin Classical, OC33012), Awake, Awake (pending release), and The Bright and Rushing World (pending release) with the Anywhen Ensemble. In addition to performing, he has held positions teaching music courses and directing numerous ensembles at various institutions including Mahidol University in Salaya, Thailand, Lane Community College, and the University of Oregon. Hashem frequently serves as a clinician and adjudicator across the United States and abroad. Hashem received his Bachelors of Music Education from the University of Texas in Arlington and a Masters of Music in Jazz Studies from the University of Oregon.

Equally at home on baroque and modern cello as well as the viola da gamba, Shirley embraces an astonishingly eclectic life as a multi-instrumentalist and collaborator. In addition to championing historical and contemporary art music, she improvises, plays jazz, writes string arrangements, and maintains fluency on a number of instruments designed by the 20th Century American composer Harry Partch.

A recipient of the Voices of Music Young Artist Award, Shirley holds degrees from Northwestern University and the University of Southern California, where her principal teachers were Hans Jensen, Ronald Leonard, and Mary Springfels. She has been an artist-in-residence at the Banff Centre for the Arts, has served as a Visiting Teaching Artist at California Institute of the Arts, and has given master classes at Cornish College of the Arts, Willamette University, and the Oakwood Academy of Creative Education. She can be heard on the NCA and Origin Classics labels as well as on numerous pop/rock albums and feature film soundtracks.

Steve Vacchi is professor of bassoon at the University of Oregon, where he also coordinates the chamber music program. His teachers have included C. Robert Reinert, Rebecca Eldredge, Matthew Ruggiero, K. David Van Hoesen, Stephen Maxym, Frank Morelli, and William Ludwig. He holds degrees in performance from the Eastman School of Music (B.M. with high distinction/Performer’s Certificate), The Hartt School (M.M.), and Louisiana State University (D.M.A.), where he held a Board of Regents Fellowship. His dissertation is a “how-to” for bassoonists on fluttertongue and singing while playing; it focuses on five solo works requiring both techniques.

An advocate of new music, Vacchi has performed more than 360 recently-composed works, including 105 premieres. A member of the Oregon Wind Quintet, he also performs with Douglas Detrick’s AnyWhen Ensemble, which features contemporary improvisation and jazz chamber music. Vacchi maintains interests in instrument collecting and early music, performing on dulcian, rackett, Baroque, Classical, and French bassoons. He has performed throughout the west coast as a Baroque bassoonist, including appearances with the Portland Baroque Orchestra and Vancouver’s Pacific Baroque Orchestra. Vacchi’s biography is included in Marquis’ Who’s Who in America. 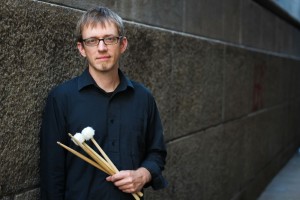 Ryan Biesack is a drummer, percussionist and educator who maintains an active teaching and performing schedule in the jazz, rock and improvised music worlds. He holds both a Bachelor of Music Performance from the University of Wisconsin Stevens Point and a Master of Music in Jazz Studies from the University of Oregon. Biesack has been an instructor of music and drum set at Oregon State University since 2009, where he teaches drum set, The History of Rock & Roll, Reggae History, and directs the OSU Jazz Ensemble.

Biesack has played professionally for over a decade, and has performed with Ron Miles, Hashem Assadullahi, Wayne Horvitz, Douglas Detrick, Ganesh Anandan, Konorak Reddy, Dylan Fowler, Halie Loren, Mile Denny and many others. In addition to being in demand locally as a performer and clinician, he has played and taught throughout the midwest, the west coast, New York City, India, South Korea and most recently in Nepal at the Kathmandu Jazz Conservatory. Biesack works with ensembles ranging in scope from straight-ahead and swinging to cutting edge, modern, improvised and new music.

Some of Biesack’s most recent playing can be heard with NYC based saxophonist Hashem Assadullahi’s Sextet, whose latest Origin Records release, “Pieces,” features dynamic original jazz compositions performed by a stellar line-up of musicians, featuring the unparalleled Ron Miles on trumpet. Ryan is also a Crescent Cymbals Artist as of 2013.