The Bright and Rushing World – Preview 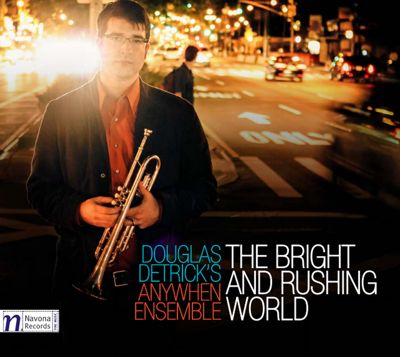 The Bright and Rushing World is a 10-movement suite composed by Douglas Detrick that was commissioned by Chamber Music America. This suite’s dynamic movements are all connected by a single, ever-present theme that guides the listener from the beginning to the end of this concert-length experience. This debut recording for the Navona Records label is set for release March 25, 2014.

About The Bright and Rushing World

I composed The Bright and Rushing World over nine difficult months. Persevering in this struggle gave me a sense of ownership over the work — I knew everything there was to know about it. But, after all that time I still didn’t know what the title should be. And I was shocked. At first it seemed like clumsy, ignorant neglect, but soon I realized something important — the piece didn’t need me any more. Now that it was finished, it was ready to go out into the world, and it wasn’t about to wait for me to give it a name. In a moment of clarity that surprised me with its intensity, I wrote this ten line poem from which I drew the title of the piece and of each movement. I had finally given the piece a name, but it had taken that long to give it the right one.

[one_half] All music composed by Douglas Detrick, 2012 In ten movements –

The Bright and Rushing World: Suite for Five Musicians has been made possible with support from Chamber Music America’s 2011 New Jazz Works: Commissioning and Ensemble Development program funded through the generosity of the Doris Duke Charitable Foundation.

Notes on The Bright and Rushing World

As I was planning the shape of The Bright and Rushing World, I knew that I wanted to write a long suite with several movements all based on a single theme that would remain ever-present and ever-recognizable. I wanted to create the most developed and integrated piece on a grand scale, so that this theme would serve as a constant thread that would guide a listener through this long work, and help to deliver him to the end of the piece with the satisfaction of a journey completed. It was the most ambitious work I set out to do, and I have to admit that it was a struggle. But, after nearly nine months of constant revisions and detours, I did finish the piece, and I had accomplished my goals. But, I wasn’t quite finished. As I was putting the final touches on The Bright and Rushing World, I realized I had not given the piece a name. It was astonishing that I had spent so much time on the piece and still did not know what to call it. So, I began to write down a flow of ideas about the piece—mostly thoughts I had had as I was composing, or phrases that came to mind, and soon the scene of a young man leaving his home for the first time with a watchful parent standing by came to mind. The door is open wide, and he walks confidently into the world, but the parent is shocked to realize, after all these years, that he had never given his son a name. I wrote this poem, with one line for each movement of the piece, very quickly.

The Bright and Rushing World

the door is open
and you watch as he goes out
a seeker, insubmissive
into the bright and rushing world,
who, over years in your care,
you never thought to give a name.

you gasp and ask aloud
how can you live without a name?
a question so weightless it floats away
on the wind of his leaving.

The poem captured my feelings about the piece at that moment. Like with every piece I write, when it is finished, when the score is engraved, when the parts go out to the musicians and rehearsals begin, it feels like your offspring. You have put so much work into making it what it is, but you do not own it, not any more. As soon as you let it go, the piece no longer needs you, just like a child grown into an adult. I had many thoughts come and go as I composed, many of them having to do with pieces of music that have influenced me. If I think about other pieces when trying to write my own, it is like trying to grab hold of other people’s ideas. Given the impossibility of this task, I just get lost. When I looked back, I realized that best composing I did was when I just paid attention to this piece. Like the parent character in the poem, the questions of “who should I emulate?” just floated away, and the piece took on its own vitality.

As you can tell, I don’t like to write traditional program notes, where the writer tells you more or less what happens in the piece and when. I can say that each of the ten movements of this piece, that we will perform without stopping, could stand alone but are all connected by a single theme that you will hear me play on the trumpet at the very beginning of the piece. After that, you’ll hear this original idea grow, change and develop so that by the end of the piece you will have a new sense of the phrase, almost as if it were alive. The piece is long. I did that on purpose, because I believe part of an artist’s duty to his community is to challenge himself, and therefore also his audience, to see the world in new and more perceptive way. Challenging our attention span is a part of this, but I also hope that you will enjoy the journey that this piece represents as much I and the ensemble will enjoy playing for you. -Douglas Detrick January 17, 2013