I wanted to take some time to write about the suite of  new music for the AnyWhen Ensemble that we’ll be premiering in New York City at The Stone and in Oregon performances in Salem, Eugene and Portland.  (Check the preceding blog entry for details.)

In writing “Rivers Music” I wanted to try to write music in the way that I see rivers move.  What makes rivers so compelling to me is their ability to absorb and contain both change and reiteration.  We know how much a river can change. We see it every year in violent floods and in devastating droughts.  We also see how a river always seems to keep on doing what it has always done:  the water keeps on moving, keeps on flowing. 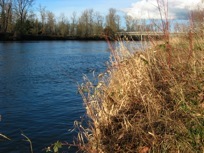 There is a foot-bridge over the Willamette River near where I live, and it’s a favorite place of mine to walk, sit and reflect.  One thing I like to do is stand up next to the railing and look down at the deepest part of the river and watch the moving ripples on the smooth surface of the water.  The water seems to have its own logic: all the ripples have a similar shape, though never identical.  We could measure the shape, graph how it changes over time, and maybe even predict the next ripple to follow, but to do so for every ripple, over the whole surface of the river, over the whole stretch of time the river has run would require more resources than we could possibly muster.  So, we do what we’ve always done: just watch.  To look at the reality of the whole river, to consider the whole thing, is beyond the scope of our imagination, but I find that I still get a clear feeling from looking at the river and can draw from it some musical inspiration.

The great composer Morton Feldman once said that change and reiteration are the only real parameters that we have to work with in music.  He is talking about the way that music moves, how the materials of music, pitch, duration, timbre and volume, interact with each other to create something that is often deceivingly complex, something that, like in other art forms, communicates through the mysterious seams of its construction, and something that we can’t really name or quantify though we recognize it when we experience it.  What is important about music is how it moves, how it changes or repeats.  Indeed, it is this first point at which the music either changes or reiterates that it defines itself, then develops from there, like in geometry where a point in space doesn’t become a line until there is another point to connect to it.  All points thereafter either reiterate the line or change its course.

In writing the piece, I tried to write an entire piece with just one idea, just one line of thought.  I thought an interesting part of the writing process was that at certain times I questioned what the actual idea was.  I felt that I knew where I was headed ultimately, but found that I kept asking myself “What is the material? What is the idea?”  I eventually found a way back to the idea, but always in unexpected ways.

I don’t generally feel that music can be “about” anything in particular, just as a river isn’t “about” anything.  So this piece sounds to me something like a river, though I don’t feel that all music must be like a river. Sometimes music builds a house, and sometimes it builds a temple, or maybe a mini-mall.

Just as when we stand on the bank of a river we can only see the surface, then, wanting a closer look, we dive in but can only see under the surface, music can’t say everything.  I think the arts step in where science leaves off, or maybe fill in the gaps or, hopefully, suggest new ideas for exploration.  Similarly, no one piece can say everything, so I think that this is a piece that stands on the bank of a river and watches.  I’m excited to share the music with audiences in performance and later on with the recording that we’ll be making in April of 2010.  Thanks for reading.